The almost century-old building that housed Reilly Brothers hardware store and had been a Fort Myers train station between 1927 and 1952, is being demolished this coming week.

Those who want to catch a last glimpse had better hurry and stay behind the fence near 3026 E. Riverside Drive, north of Palm Beach Boulevard, just east of downtown Fort Myers.

Reilly Brothers moved there in 1968 and closed in 2007 at what had been the abandoned Seaboard Air Line Railroad Station. The late Jim Reilly often said Henry Ford used this station when he wanted to arrive in secrecy. From there, he would walk to his vacation home off McGregor Boulevard.

The late ‘60s saw the arrival of the hardware store after the closure of the railway.

“We kept running the business until 1993, when my husband passed away,” Laura Reilly, wife of the late Jim Reilly Sr., told me last fall, when I first heard the buildings would be demolished. Then their son continued operating the hardware and plumbing supply store until 2007. 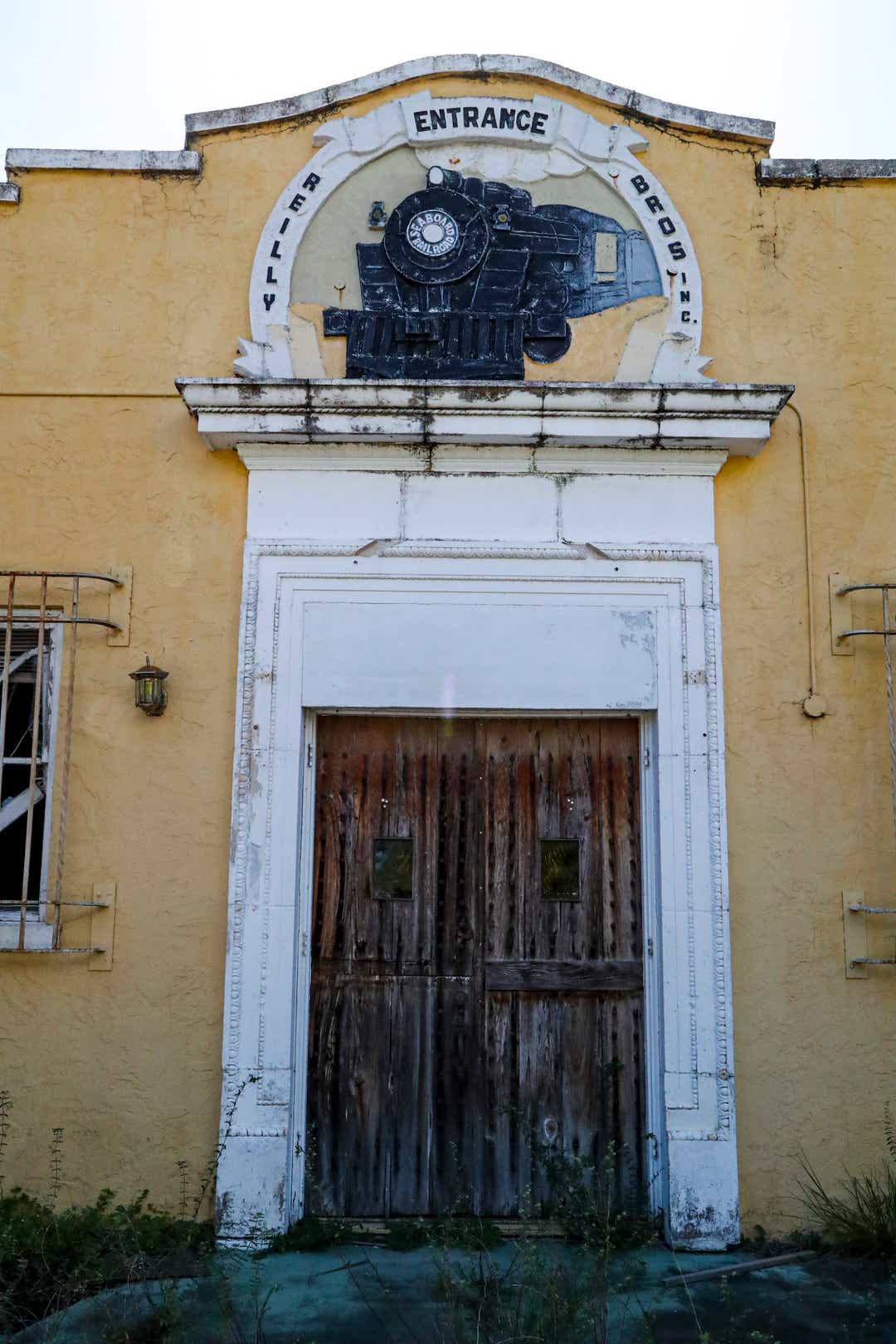 Randy Price, a real estate developer from western Michigan who has spent the past 20 years visiting Fort Myers for vacations, bought the property plus the adjacent former gas station. He combined them into a five-acre parcel.

Price purchased the Reilly Brothers location for $1.2 million in 2018 and added the out-of-business former Mobil gas station fronting Palm Beach Boulevard for $300,000 last year. He had intended to build a self-storage facility. The COVID-19 pandemic and resulting economic crunch prompted him to put any future development on hold. He wants to see how things play out financially and explore other long-term opportunities.

“Right now, I just want to get the buildings demolished,” Price said. “They’re a bit of an eyesore and a bit of a hazard. We’ve had instances of people taking advantage of them lying vacant and so forth.

“We want to get the demolition done and get the lot cleaned up.”

For now, Price will leave the metal building on the north side of the property standing, as he allows a local non-profit organization to use it for storage.

“We’re looking at several different opportunities for the property,” said Price, who also developed Mandolin Bay Villas in Fort Myers and owns restaurant groups and other properties in Michigan.

“I liked the direction the city’s going,” Price said of Fort Myers. “There’s a lot of energy. I invested in that property. I had done some research on what used to be there. The building itself however is so far gone, so deteriorated, both from termite infestation and just the way it’s been put together over the years. There’s nothing of architectural historical significance there. We had that looked at by the city before we got our demolition permit.”

Gina Sabiston, vice president of the Lee Trust for Historic Preservation, said it pained her that another building from Fort Myers’ early-city years would be destroyed. She saw plenty of historical value in trying to keep and refurbish the old depot.

Like a time capsule, part of the word “white” still can be seen on the outside and above one of the doorways, a reminder of the city’s segregated past, as the depot had separate entryways for white and Black passengers.

Sabison wished the owner would keep and refurbish the building so as the city grows, it could do so around an architectural remnant from the past.

“It’s been the same story for decades, where people just don’t want to deal with property maintenance or code issues or vandalism, and they use that as an excuse for tearing down buildings,” Sabiston said. “It’s easier to tear a building down than to restore it. But when you restore it, there are multiple studies that show the building becomes even more valuable.”

The hardware store’s demise resulted from another historical trend, the rise of big-box retail outlets.

“We lost a lot of customers when Lowe’s and Home Depot businesses came in,” Laura Reilly said.

After the City of Fort Myers changed the traffic routes, making Palm Beach Boulevard a one-way, westbound road right in front of Reilly Brothers, that impacted business even more.

“The people couldn’t find us,” Reilly said. “They would get lost with the detours. So it became very difficult to keep running the businesses.”

By November 2006, business had taken a 42% drop from the previous year. That’s when James Reilly Jr., decided to sell all the inventory and close, leaving five acres vacant.

“We were not that emotional about it, because it had served its run,” Laura Reilly said.

The old depot and store is infested with termites, has a caving-in roof and just isn’t safe, Price said.

The amount of residential development nearby would support self-storage in that location, Price said, but again, he wanted to see the ramifications of the economy first.

“If I do a project, I don’t think people will be disappointed in the appearance, I can tell you that,” Price said. “When I do a project, I take a lot of pride in it. This could be years in the future. It’s just going to take time. It’s an interesting time in history.”